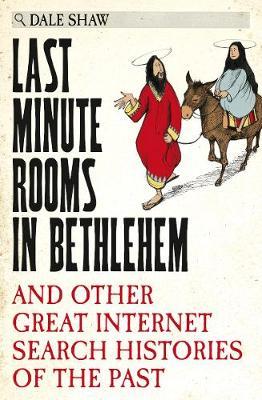 Last Minute Rooms in Bethlehem: And Other Great Internet Search Histories of the Past

From God (`Best Size for a Bang?') via Dickens (`Things Urchins Say'), Henry VIII ('Breaking Bad News to women from Cleeves') and Karl Marx 'Cheating at Monopoly'), here are the greatest moments from history as told through internet search histories. Following on from classic humour titles such as 1066 and all that and An Utterly Impartial History of Britain comes the perfect gift for any history buff who wants a chuckle.

A hilarious compendium of the great events from world history told through internet search histories.

Dale Shaw is a television and radio writer, journalist, screenwriter, performer and musician. His first book, Letters of Not, was published by The Friday Project in 2014. His sketch show, What The Future was broadcast on BBC Radio 4. His second book F*ck this Journal was published in 2015. He has written for The Now Show, The News Quiz, Russell Howard's Good News, The Impressions Show, That Mitchell and Webb Sound, School of Comedy, as well as for the Guardian, Index, Huffington Post, BBC Online, Washington City Paper and many more.